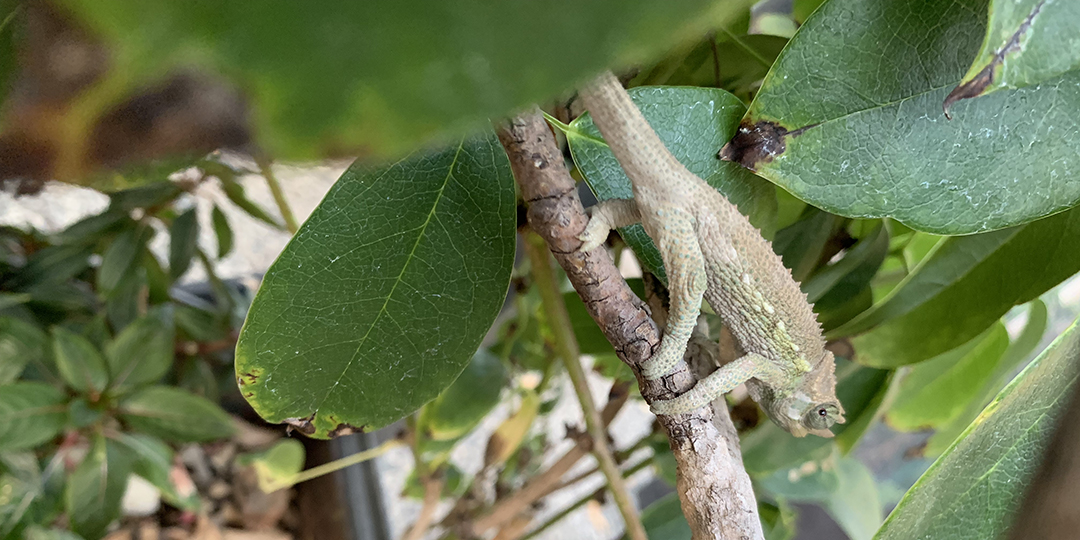 Running away from you

Chameleon seems content sitting in their cage, but when you put your hand in through the door of the cage they panic and run away.

Meaning: Chameleons will learn that their cage walls protect them. They will be content to the point where they will accept you walking around outside their cage and not take notice, But as soon as the door opens they know that their protective barrier has been breached. This is the change that has occurred for your once content chameleon to now act panicked.

Possibilities: Panic at your intrusion into their cage comes from two main sources. The first is pure survival instinct. The second is a traumatic experience tied to you.

Instinct says that any animal larger than them that can touch them will eat them. While that is not strictly true, erring on the side of caution has served chameleons well for millions of years. It is important that we realize that there is no way for their DNA to suddenly accept that there is now such thing as a benevolent god that will care of a provide everything to the chameleon. The concept of being a pet is still foreign to a chameleon. Humans have had huge success in domesticating dogs, but chameleon domestication is far behind.

Instinct can be changed. But you need to replace it with something else, it will take a great deal of patience, and the instincts inside will always be shouting that accepting you as a friend is dangerous. You will need to be prepared to spend a great deal of time replacing what you mean to your chameleon.

Learned Response to Being Medicated

We chameleon keepers bring this on when we medicate our chameleons. The chameleon does not understand medicine so all it knows is that whenever your hands are close it means their mouth will be pried open and something strange tasting shoved down their throat. Of course, when we have to do this once a day for two weeks it cements in our chameleon’s mind that us being close is trouble.

There is no way around this as they need to be medicated. The level of damage medication routine has on your relationship depends on how traumatic the mouth opening is. If your chameleon is excitable and gapes every time you get near then there is no struggle until your chameleon gets wise to your tricks and stops gaping when you come near. For a timid chameleon that does not want to open his mouth at all the trauma starts on day 1. Reversing this is a long process that requires patience.

Solution: The only thing that will stop this from happening is if your chameleon starts to attach a different meaning to your hand being in their cage.

The easiest way to remove the panic is to make your hand mean food. To do this, find out what their favorite food is and only offer it by hand. Often worms are a favorite.

An example of how to carry this out follows:

First Week: Let’s assume that the chameleon has decided that silkworms are their favorite. During this training drastically reduce his other feeding to, perhaps, once a week. Put a silkworm in your fingers and put your hand in the cage just a little bit. Your chameleon will see and probably cower in the opposite side of the cage. Hold the silkworm so he can see his favorite food item squirming there. After a minute or so, put the worm in a food dish or some place where he reach it, and then remove your hand and close the cage so he can then run out and snag the worm. Do that for three times every other day.

Second Week: Through all this time he is learning that his favorite food item comes with your hand. Of course, he never has to deal with your hand because he just waits for you to go away and he gets his favorite treat! What you are doing is training him to enjoy silkworms. Because the next week you will hold on to the worm twice as long before removing your hand. What we are doing it building up the impatience within him. We have to replace the fear with something and we are replacing it with impatience. He should be getting annoyed that you take so long to let the worm go. But for the second week hunger should be catching up with him making him even more impatient for you to leave.

Third Week: Time to turn up the heat. If he hasn’t realized that every second he sits in fear of your hand he is not chowing down on a silkworm then we are going to hit low. For this week we will not feed him at all. If he doesn’t take the worm from your fingers, he doesn’t eat. And after two minutes of offering the worm with your fingers you remove your hand and the worm and leave him to think about what just happened. If replacing fear with impatience didn’t work then we are going to replace it with hunger and a different kind of fear – the fear of missing out! When you come back two days later he should be incentivized by 1) hunger, 2) a sense of urgency to not lose his dinner, and 3) two solid weeks of evidence that your hand in his cage no longer is a threatening thing.

Continue with the third week strategy until hunger drives him to take from your fingers. Chameleons can go a couple weeks without food so we are not concerned about starvation. The sign that he would rather die than take the worm from your fingers is after two weeks of not eating and still refusing to eat. At this point, you can make a judgement call as to whether you want to give up or not. Giving one food item a week will keep him nourished, but still hungry so you can continue like that. 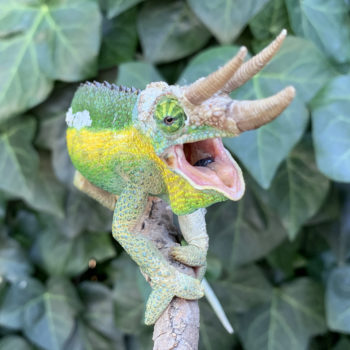