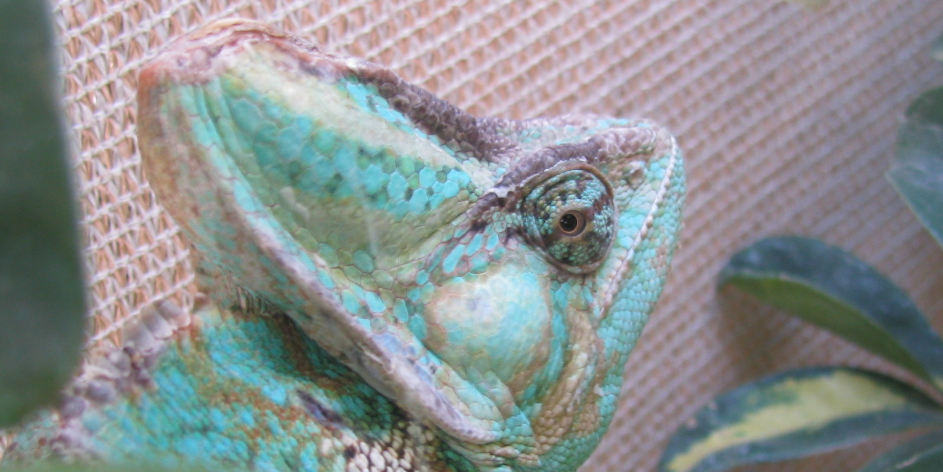 Obesity is a significant problem in captive chameleon populations. We love our pets and feeding our pets is not only fascinating for us, but is a sign of that love. We would never let our pets go hungry! And this well intentioned action actually creates an unhealthy situation where our chameleons become overweight and unhealthy. In gravid females it can be deadly. The large fat pads become life threatening in females when they grow so large that they make it difficult for the large eggs to make their way through the oviduct and to the laying nest. This is a form of egg binding.

The preventative measure is simply to feed sparingly once they are done growing. An effective feeding schedule is to feed them as much as they will eat when they are babies growing. up, but as soon as they reach adulthood to back off to about 3 appropriately sized feeders every other day. This is a good rule for just about every species. The trick is to know when they are their adult size. For the sake of this topic we would define that as wen they stop growing noticeably in length and start growing in girth. The bright side to this hazy time point is that you can easily back off on food once you notice the fat pads becoming prominent. So this is a reversible condition. It is something that you should keep an eye on, but do not stress about figuring out the exact time.

Veiled Chameleons re a special case as they grow so quickly and as so tolerant of conditions which are too hot. Instead of dying, they supercharge and grow fat. Besides the unhealthy aspect of gaining unnecessary weight, this has the potentially life threatening effect on female Veiled Chameleons that they will develop huge clutches of egg, whether fertile or not. Clutches of 60 or even over 100 eggs are not uncommon. For a species that should be laying 20-30 eggs per clutch this is a huge physical burden on her body and complications in laying eggs can happen. Dystocia, meaning the many complication commonly termed “egg binding” is a potentially deadly condition that has become so common that some veterinarians suggest proactive spaying (removing of the egg follicles and oviducts) to avoid the situation. This could, of course, be solved with proper Veiled Chameleon husbandry. By reducing the basking temperatures and food intake (see Veiled Chameleon Care Summary for details) the chameleon can maintain the healthy, svelte appearance that serves them so well in the wild. A huge issue, though, is that the general chameleon community equates size with health. With many keepers, and even breeders, sharing pictures of obese Veiled Chameleons bragging about their body or egg clutch size, the general perception of what a Veiled Chameleon should look like gets skewed. Reference the Veiled Chameleon Care Summary linked before to read the latest in husbandry information.

When eating more than they need, the chameleon’s body will store fat in various places in the body. These areas will take on a softer appearance. Various places more noticeable will swell including the casque of the Veiled Chameleon or the top of the Panther Chameleon head. Below is a set of reference images that show a healthy shape and an obese shape. 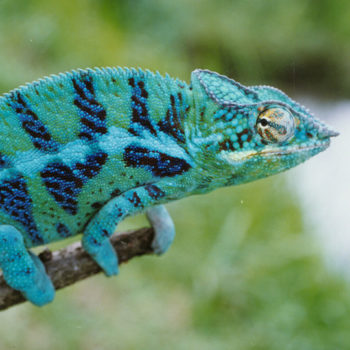 Take a look at the casque (top of the head) in this wild caught male panther chameleon. Note how it dips down. In this casque there are two fat pads and we will see soon what it looks like when they are bulging. 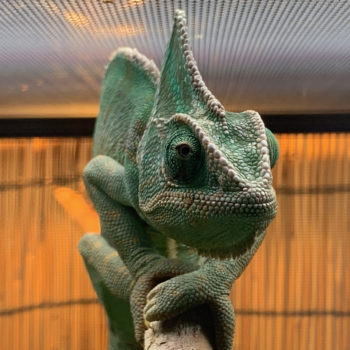 This is a healthy female Veiled Chameleon. The Veiled Chameleon casque will swell with obesity, though, it is the growth of the fat pads by the “hip” area that are of most concern due to their possible complicating effect on egg binding. 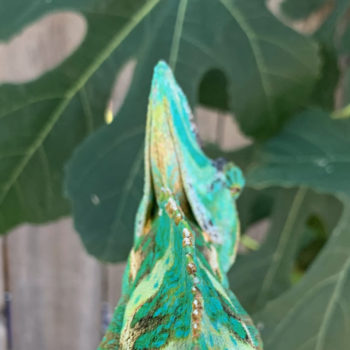 This is the rear view of the Veiled Chameleon casque. You can see folds of skin in back. These will balloon out with in an obese chameleon. 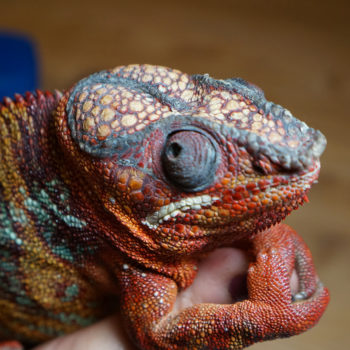 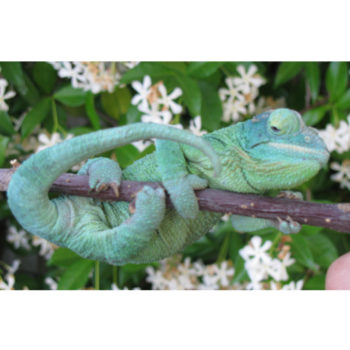 This is a female Jackson’s Chameleon who is both overweight and has developed gout. Both of these conditions contribute to difficulty holding on to the branch. 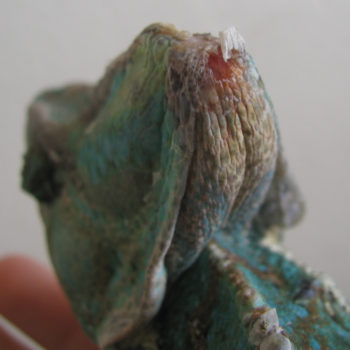 In this image you can see the bulging casque of an obese Veiled Chameleon. 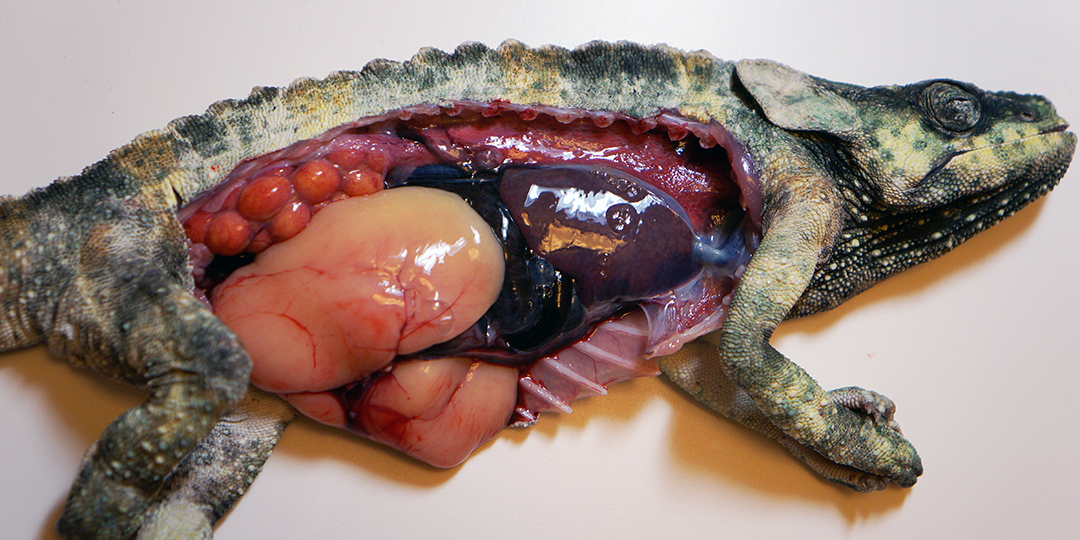 In this necropsy you can clearly see the fat pads in the deceased female Meller’s Chameleon. The orangish, creamy colored objects to the hind end (left side of image) are the fat pads. When these are filling the body cavity in back there isn’t much room for relatively large eggs to squeeze through.

Treatment for an overweight chameleon is simply to cut back the diet to the recommended amount. You can even skip a feeding in that new schedule if there is a massive problem.

The most likely place you will need vet involvement is if you have a female chameleon and she is having problems laying her eggs. You may need to have the vet extract the eggs.

Nutrition is very important as it is with all living beings. Make sue that all the feeder insects are on a strong gutload schedule and are supplemented appropriately. And then give enough to sustain life, but not to overfeed. Chameleons can easily go a week without food.  They do not burn many calories just sitting there doing what a chameleon does! Keep your chameleon lean and keep their food nutritious. Generally, we feed as much as they will eat as babies until they get to adulthood and then three feeders every other day. Gravid females are allowed as much food as they can eat until they lay their eggs and the special week or two recovery period afterwards. 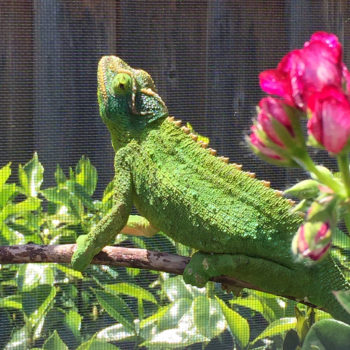