It is likely that we will never see Trioceros conirostratus in mainstream captivity. It is interesting in that the male has one small rostral horn, but otherwise is a brown, bitaeneatus-type chameleon that would have a hard time being noticed next to a panther chameleon. Though, at least someone in the world is paying to have them exported as researchers discovered that trade has existed before the scientific world officially recognized this species existed in Uganda. There is little known about the husbandry of this species as the people who have kept this species are either not in the general English speaking chameleon community or do not wish to bring notice to themselves. But this species is worth studying if only to gain insight into how we learn about chameleons and to realize that exploration is still in full swing.

In September 2018, the most complete description of this species was published. The link is below and is the reference for the rest of the information regarding this chameleon in Uganda. This species was described in Kenya through the book Mountain Dragons by Jan Stipala.

Trioceros conirostratus is found in Uganda, Kenya, and Sudan. It was always suspected to give live birth, but it wasn’t until a paper was published in September of 2018 that scientific literature had confirmation of this. This paper lists T. conirostratus as occurring between 1300m and 2500m.

One interesting find is that when handled they actively rub their temporal gland on their captors, spreading the stinking material they develop there. Researchers noticed they had a foul smell on their hands even 24 hours after washing with soap. Presumably, this is a defensive action.

Little more is known about this species, but we will develop a fuller picture as more study is done.

The study describing Trioceros conirostratus in Uganda can be found at the following link: 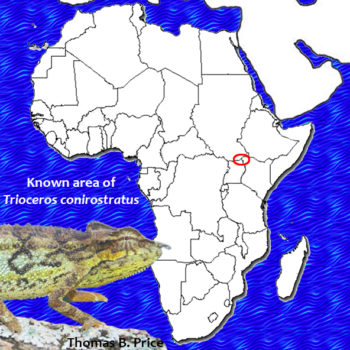 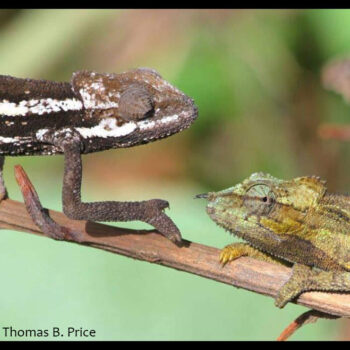 A Pair of Trioceros conirostratus from Uganda. Female is on the left. Image by Thomas B. Price 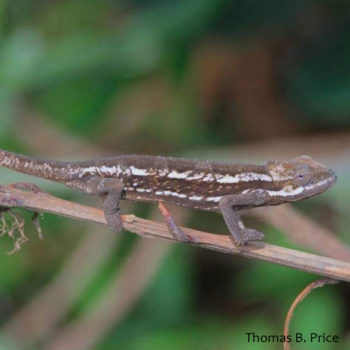 Female Trioceros conirostratus from Uganda. Image by Thomas B. Price 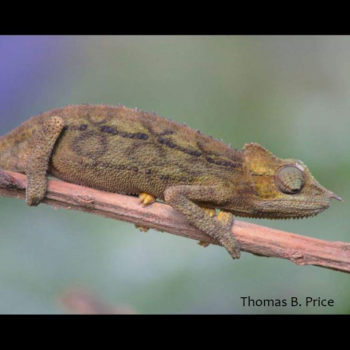 Male Trioceros conirostratus from Uganda. Image by Thomas B. Price