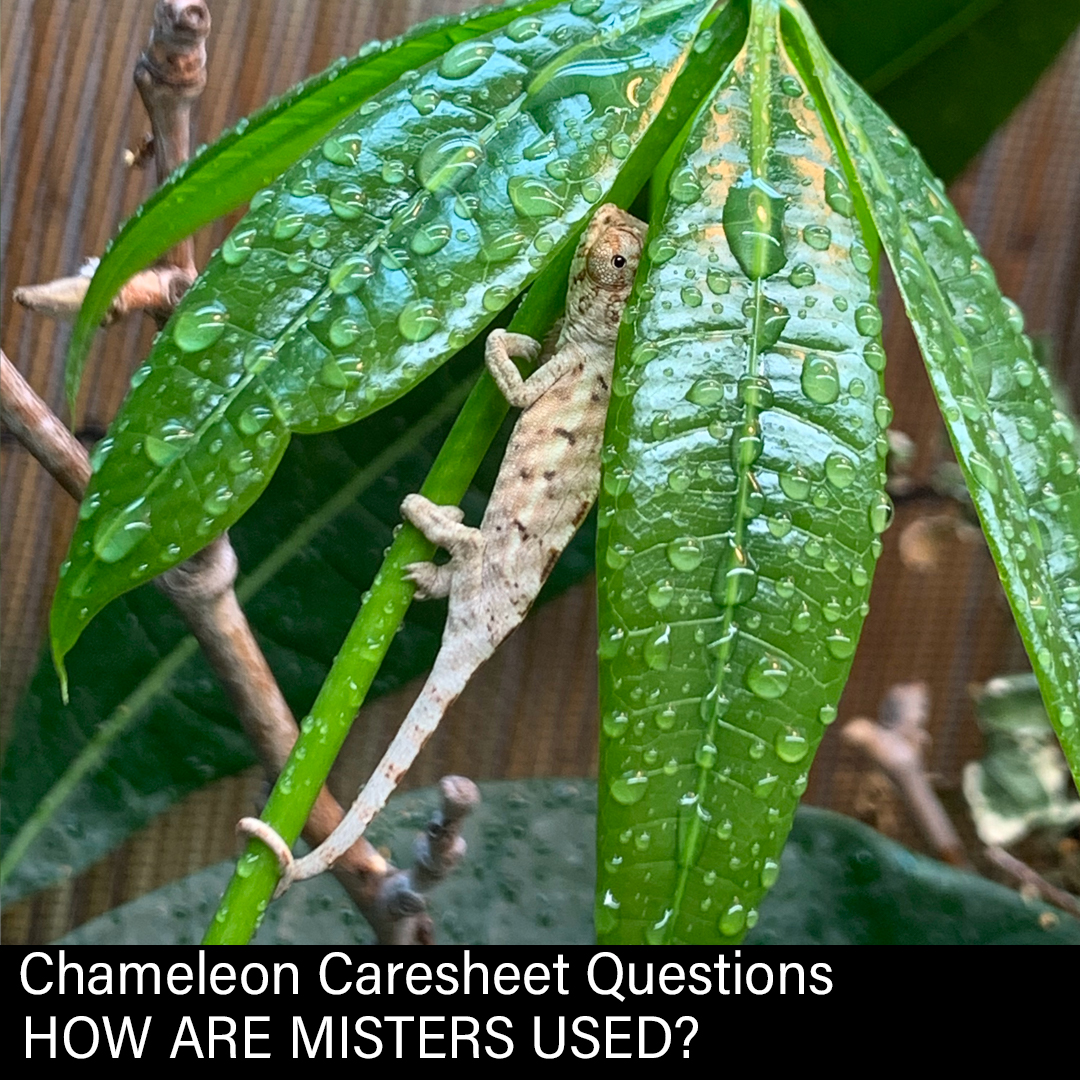 Chameleon Environment: How Are Misters Used?

Misting has been the cornerstone of chameleon hydration. Though most care sheets do not touch on hydration at all, the hallmark of the Chameleon Academy Care Summaries is the more detailed description of hydration methods and timing.  The confusion will come in with how misters are used. Some advocate misters being used as the primary hydration tool during the daytime while others place misters as a nighttime hydration tool in conjunction with a fogger.

The historical way that misters have been used is to get water on the leaves where a chameleon can drink it or, even, to shower the chameleon until it drinks the water showering down on it. At the beginning of my podcast I was a vocal proponent of using misters to shower down chameleons until they drank and rolled their eyes in their socket. This was interpreted as them washing their eyes out. The problem with that thought process was twofold. First, chameleons absolutely hated being sprayed. Second, they got ample water during the wet season, but somehow survived months of dry season and so it didn’t make sense that they needed so much water multiple times during the day. This was finally explained and fixed when the hydration cycles were reversed to the more natural nighttime and morning hydration termed the “naturalistic hydration method” and shown on the present care summaries.

The naturalistic hydration method, as currently presented, uses misters, but only ay night to prep the cage for foggers and to provide a blanket of dew on the cage surfaces for the chameleon to find in the morning. Misting is discouraged during the daytime as it is annoying to the chameleon. It is true that a thirsty chameleon will drink when misted during the day, but it is so much better to get them on a good hydration schedule so they are not feeling the need to drink. I go as far to say that you know when your hydration regimen is successful when your chameleon has no interest in drinking during the day.

The controversy you will run into is that the bulk of the community is still using misting during the day and is resistant to switch up what has been working all this time. They do not see benefit to switch up what has been working well enough so far. And, no one cares to be told that what they are good at doing could be done better. So this switch to using the misters as a supporting tool for nighttime humidity and morning dew will be a slow one and mostly with new keepers.

The role of misters in chameleon hydration will be a dynamic one. Misters are actually not the ideal tool for the job we are using them for. Pressurized water coming from the side is not what we really want. The ideal is a more rain-like situation where we can turn on a “drizzle” or light shower to provide our morning dew. As more people get involved in advanced vivarium equipment this should become possible.

So, in conclusion, daytime misting has been used effectively for many years. The newest care sheets, including the Chameleon Academy Care Summaries, advocate for nighttime use and as a supporting roll to nighttime humidity. This is a caresheet parameter in transition as the community grows in understanding of chameleon hydration.

Back to the Chameleon Question Hub!

Click here to go back to the Chameleon QuestionHub to review more questions! 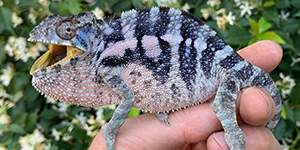 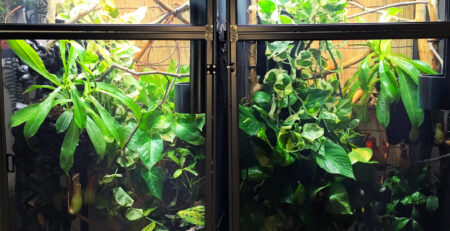 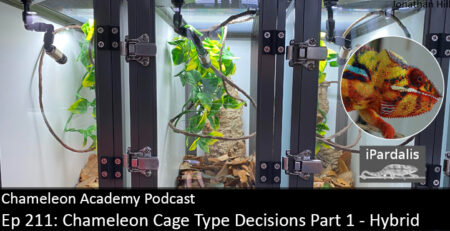 Isopods are one of t... read more 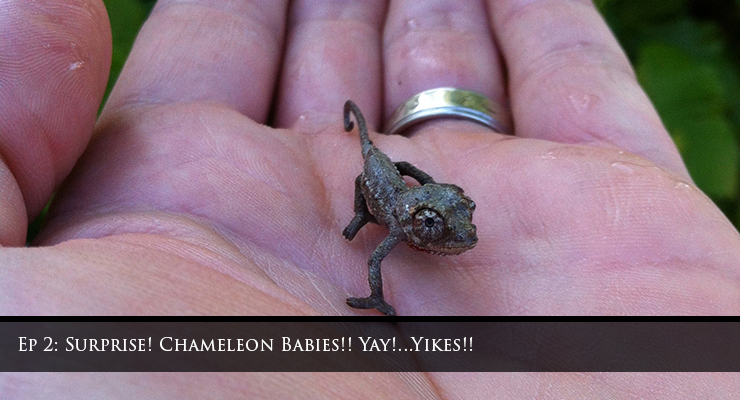 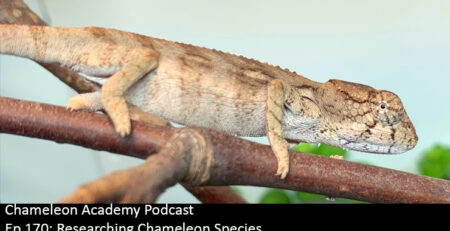 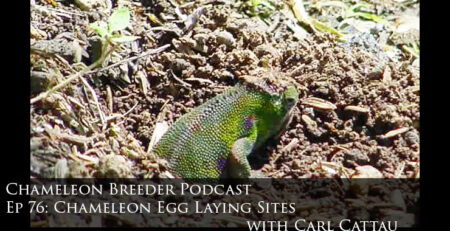 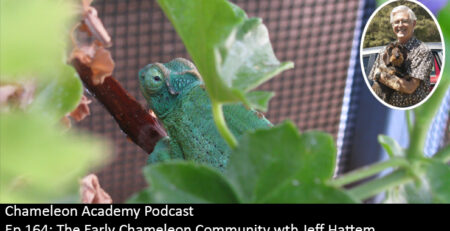 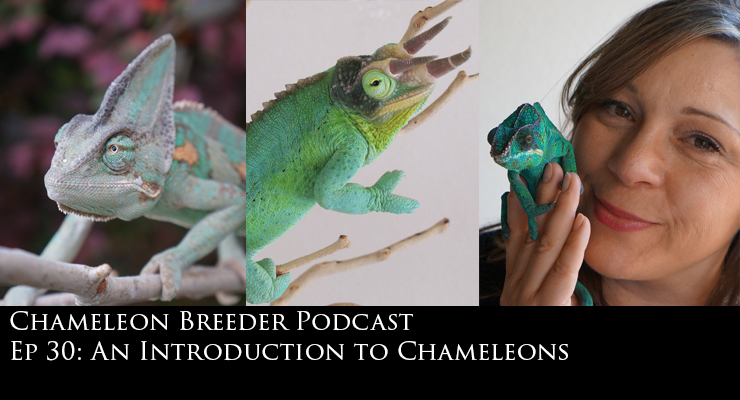